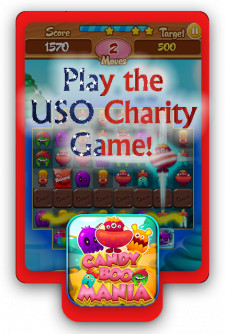 The USO Mobile eSports Tournament starts July 2 and runs through July 31, 2021, on MegaFans' popular mobile game, Candy Boo, which is available in the Apple and Google Play Stores. More information can be found at www.Megafans.com.

A portion of all in-app purchases and sponsorship donations will go to the USO and help offset regular fundraising efforts that were affected due to the Covid-19 pandemic. Players and sponsors are also encouraged to make direct donations outside the eSport tournament at the USO website west.uso.org.

Players will be able to see their placements on the live leader boards inside the game for friendly competition. The top winning 80 placements will each guarantee donations to the West.USO.org.

The USO is a family of volunteers, sustained by the charitable contributions of millions of generous Americans, united in as a Force Behind the Forces®. The USO is committed to continuing to support our heroes in uniform for many more years to come. Our service members and their families' sacrifices require us to rise to the challenge, as we have done for the past 80 years, and will continue to do for years to come because nothing is more important than serving those who serve us all.

Get notified about new releases.